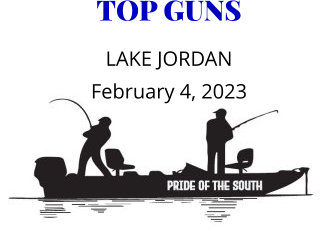 DRAW YOUR NUMBER WHEN YOU ARRIVE AT CHECK IN FEBRUARY 4TH STATE RAMP.
1ST 60 TEAMS TO PAY ENTRY FEE BY SATURDAY JANUARY 30TH 2023 HAS A SPOT.
NO MONEY ACCEPTED AT THE RAMP.
IF 25 PAID ENTRYS ARE NOT RECEIVED FULL REFUND BACK TO THOSE PAID.

DATE: FEBRUARY 4TH 2023 LAKE JORDAN
WEIGH IN: WILL BE AT STATE RAMP
LAUNCH FROM EITHER RAMP

1. Every Angler Fishing the TOP GUNS is responsible for reading and
following the rules. Failure to comply can result in disqualification.
2. Tournament director has the final say and can deny any team from entering
the tournament no exceptions.
3. All State, local, Corp of engineers and Pride of the South rules/laws will be
obeyed. All contestants must obey Alabama Water Safety Rules, Alabama
Game and Fish Regulations. It’s the Anglers responsibility to be
knowledgeable of the rules. If your team is issued a ticket during any Pride
of The South tournaments, you must notify the tournament director prior to
weighing any fish. It’s the tournament director’s discretion to determine the
penalty up to disqualification.
4. Life Jackets and Kill switches are to be worn during blastoff and anytime
the boat is on plane. Must follow life jacket rules while fishing dams if
allowed. No fishing while big motor is running or use big motor in current
to fish.
5. Sportsmanship Rule: Any unsportsmanlike behavior during tournament
hours will be grounds for disqualification from the tournament. This
includes but not limited to behaviors like, someone hole sitting for you,
reckless boat operation, intentionally snagging fish, etc….
6. Communication rule- During tournament hours the use of any
communication device to seek guidance or fishing information is not
allowed. The hiring of guides, non-eligible anglers, or non- membered
anglers pre-fishing for you prior to any Elites event is not allowed.
7. Only 2 people maximum per boat.
8. All fish are to be caught during the hours of the tournament on the body of
water the tournament is being held without leaving the boat or receiving
fish from another team.
9. You must always stay inside the hull.
10.ON TIME CHECK IN- Each team is given two Key Fobs when you register in
the morning. You are responsible to hang 1 Key Fob back on the board per
the clock’s time installed on the board before you due in time (Example
3:30 weigh in time (3:29:59-on time) (3:30:00 Late disqualified). The 2nd Key
fob bring with your fish to weigh in. If you choose to leave early or not
weigh, please hang both back on the board so we know you are off the
water.
11.Five fish 12 in or Lake Rule limit per boat. Must cull as you go only keep 5
fish in the live well at one time. No culling at the dock.
12.1/4lb (4oz) per 1 dead fish. 1/2lb per 2 or more dead fish (Example: 1 dead
fish .25 deduction 2 dead fish .75 deduction 3 dead fish 1.25lb deduction.)
Lunker winning fish must be weighed alive. Short fish will be released
immediately. Ties will be determined by the Lunker between the two teams.
It is the team’s responsibility to notify the weigh master that you want your
Lunker weighed. Any suspicious dead fish can be denied being weighed in
per tournament director’s discretion.
13.All fished weighed in will be released back. It’s the tournament director’s
discretion to allow teams to trailer prior to weighing in.
14.Artificial bait including A-rigs are allowed to be used. No trolling or live bait
fishing. Only 1 rod allowed at a time. You must completely retrieve your
line inside the boat prior to picking up another rod. Jigger poles are not
allowed.
15.All site fish must be caught inside the mouth. No snagging
16.No alcoholic beverages or illegal drugs allowed during tournament. If
you’re subject to taking a polygraph no drinking after you weigh your fish
until all places and prizes have been decided.
17.Must abide by all “NO WAKE ZONES”.
18.Can leave the boat in an emergency only. No fishing allowed while not
inside of the boat during an emergency.
19.In the event you break down contact the tournament director @ 228-327-
5941 for instructions. If you’re trying to get back to weigh in you are
allowed to ride in with another team as long as one team member stays
with the fish.
20.Any Boat is allowed to carry gas with you in an approved coast guard tank
with quick disconnects. Handheld tanks are not allowed cannot leave boat
to get gas on land. No one is allowed to bring you gas during the
tournament.
21.Live well check will be conducted during registration.
22.An approved boat must be equipped with an Outboard Water-Cooled motor
only. No jet foot motors, or go-devil style motors will be allowed to enter
the tournament. Also working kill switch, working live well, working
navigation, and running lights. Your motor Horsepower cannot exceed you
manufactures plate. (Any questions call Tournament Director 228-327-5941)
23.If a team has their trolling motor down FISHING, you must give that team a
50 YD courtesy distance unless both teams agree differently. If a team has
their anchor out FISHING, you must give that team a 100 YD courtesy
distance unless both teams agree. This does not mean you can block
access to fishable waters by sitting in the entrance of a creek or lake. If a
boat wants to gain entrance and you’re fishing the mouth they are allowed
to idle or troll past WITHOUT FISHING until they reach the courtesy
distance.
24.Anyone that fishes any of the pride of the south tournaments are fishing at
their own risk and cannot hold anyone that is involved in the tournament
responsible.
25.Each event will have a mandatory polygraph test performed per the
Tournament director’s decision. A formal protest must be filed by the
closing of the scales in person. Any obscene or vulgar gestures said at the
event because of the protest will result in banning of the trail. This type of
conduct will not be tolerated.
26.In case of a 1st place tie the team with the biggest fish in their limit wins the
decision and the losing team of the tie will be considered 2nd place. Lunker
ties will result in a 50/50 payout split.
27.W-9 FORMS are required before any team gets paid. All payments will be in
form of a check.

Results will be posted here.